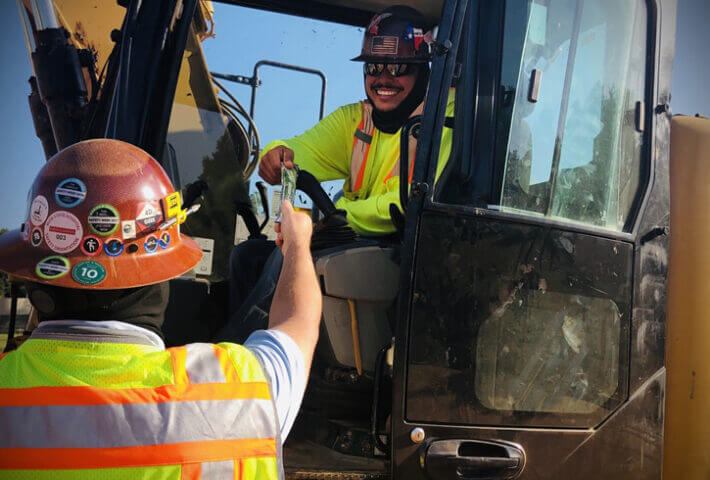 Lean team building can sometimes be accomplished by unorthodox methods. Here is how a popsicle changed my perspective & opened up new avenues of communication.

How a Popsicle Changed My Perspective

Building in the South can be challenging because of its extreme climate conditions. New hires, seasoned veterans, and craft professionals can be impacted by heat stress depending on the weather, pre-existing health conditions, or by underestimating their exertion to hydration ratio.

Superintendents in the region have to frequently re-work traditional heat illness programs to fit these conditions leading up to the summer to make sure everybody knows how to stay safe.

Many programs have two elements, focusing on onsite training and procuring and installing heat relief equipment. On my projects, we develop site-specific Heat-Related Illness Prevention Plans, customized to each area’s conditions. Although I have standard protocols for training and equipment that I use for each project, understanding unique elements to the climate can help us decide where to focus our efforts. From there, we purchase controls like misters and use safety, pre-task and daily huddle meetings to reinforce the correct rest-to-work ratios alongside heat-related protocol.

Earlier in my career, these tasks became habit. Then one summer, a popsicle changed my perspective.

It was on that day while constructing a hospital in the desert heat of New Mexico, I went to make my rounds around the jobsite and decided to bring a box of hydration popsicles to hand out to trade contractors to make sure they were keeping cool. After being met with many smiles, I decided to make a habit of this and over time, I earned the nickname of “ice cream man.”. The craft professionals even began to hum the tune from their childhood ice cream truck when they saw me coming. During these “ice cream” breaks, the field team began to connect, share some laughs, and bond in a way that slowly began to break down some barriers. The break became more than just “popsicle time.” It was an opportunity to connect, communicate, and show the trades that we – the general contractor – cared about them.

I noticed improvements in the team’s morale and camaraderie, and it facilitated transparent discussions of what was working on the project and what could use improvement. In my mind, the simple act of giving a popsicle began to build a Lean foundation – a culture of caring – on the jobsite. If you are looking to build a cohesive team on your projects, here are a couple of thoughts on how to start lean team building.

Step out of your comfort zone. This may mean stepping out of the office and handing out popsicles. It may be taking time out of your day to learn the names of the individuals installing the drywall. It may be asking the plumber how his weekend went and how his kid did in their sporting event on Saturday. The popsicle fostered an experience that allowed me to show the field I cared, but ultimately it broke down a barrier, creating an opportunity for everyone to pause. More conversation led to collaboration amongst team members. When handing them a popsicle, I would also thank them for their hard work. When verbally expressing appreciation to them I started noticing that trades began speaking more amongst themselves and this would initiate their collaboration on workflow as well.

These simple conversations helped individuals feel comfortable giving suggestions and provide feedback that impacted the entire project site. In one of those small talk conversations with a mason, he shared a near miss. He easily could have never mentioned it, but instead, he felt comfortable with sharing with the team in hopes that it would improve the safety of his fellow team members. Days later, I had an electrician point out that handrails by the elevator were now missing. In fact, not only did he point it out, but he also immediately volunteered to help put them back with ideas for better placement.

Although no one can prove that a popsicle encouraged team members to collaborate more or inspired the continuous improvement of safety practices on the jobsite, it is always true that people want to be feel appreciated. A culture of caring, established through a popsicle or another kind gesture, will go a long way – especially when things heat up.

Daily Huddle – 3 Tips To Keep Your Lean Huddle on Track
https://theleanbuilder.com/daily-huddle-3-tips-to-keep-your-lean-huddle-on-track/
Interested in learning more about LCi Corporate Membership and being recognised as a leader in Continuous Improvement within the Irish construction sector – please contact shauna@boxmedia.ie

Lean and BIM Synergy at the Construction Phase
https://leanconstructionblog.com/Lean-and-BIM-Synergy-at-the-Construction-Phase.html
Interested in learning more about LCi Corporate Membership and being recognised as a leader in Continuous Improvement within the Irish construction sector – please contact shauna@boxmedia.ie

What is the Takt Production Model?
https://leanconstructionblog.com/What-is-the-Takt-Production-Model.html
Interested in learning more about LCi Corporate Membership and being recognised as a leader in Continuous Improvement within the Irish construction sector – please contact shauna@boxmedia.ie